8 Predictions For The Future, The 3D Revolution, Overheard At Davos, & More. Issue #8 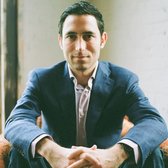 Is your new year off to a good start? Hope so. The world is more interesting than ever before, in bad